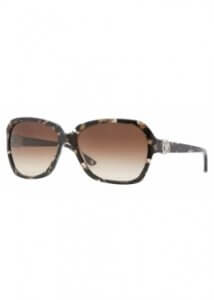 I once had a boyfriend who scolded me harshly for never wearing sunglasses. He wasn’t concerned about protecting my eyes. “All that squinting will give you wrinkles,” he said. I was 19.

But I never much cared for sunglasses because I thought they didn’t look good on me. In the same way that only certain people can pull off wearing a bowler hat or horizontal stripes, I was convinced I just couldn’t pull off sunglasses even though they’re a fairly universal and not particularly daring accessory. Plus, I felt like I couldn’t see as well in sunglasses, and I swear I couldn’t hear as well with them on, either. (The reverse wasn’t true — I could wear earplugs and still see fine.)

The only time I ever wore sunglasses proudly and often was the summer when I was 11, in a darkened skating rink. My pals and I all made like Corey Hart and thought we were so cool, when we must have looked dumb as shit. Being childless, I don’t know how parents can stand witnessing ever-escalating acts of stupidity nonstop for 18 years or more. (If I’m getting a little off-track here, it may be because my soon-to-be stepson got himself stuck under the bed today. He’s 14.)

Anyway, I have since worn sunglasses off and on, but I always felt so self-conscious and goofy in them that I’d end up pushing them up on my head, and so there are a lot of pictures of me squinting into the camera with sunglasses perched on my head, like a glorified headband. It’s really hard for them to do their job that way.

Everything changed when I met Jeff. First, he’s an optometrist, so he’d lecture me about UV damage to my eyes. (And now that I’m coming up on 38, the crow’s feet are a more proximate concern.) Second, he lives in Texas, where the sun richocets off the concrete in a much crueler way than it does in Chicago, and instant blindness seems like a plausible outcome. Third, with his trained eye and deep inventory he is able to pick out pairs that look good on me.

He created a monster (I now have 14 pairs and counting) and a braggart, because this entire post is just preamble to my showing off the super-swank pair of sunglasses I got from Jeff who just signed licensing agreements with Versace, Chanel and others. (See picture! Write comments!)

The great thing about sunglasses is that they make designer labels accessible to people like me who don’t have a lot left over after they pay the rent, re-stock the wine fridge, and buy Fresh Step and cat food. (Of course, Wilkie and Gideon require the expensive, specially formulated kind or else their pee will crystalize, in which case they’ll end up at the vet and Wilkie will eventually lose his cool and be outfitted with what’s whimsically refered to as a “party hat” but is actually a conical Hannibal Lecter type of device they only ever use on the worst cats.)

Oh, and another great thing about sunglasses is they safeguard your vision.