Two things happened this month and one of them might be life-changing. 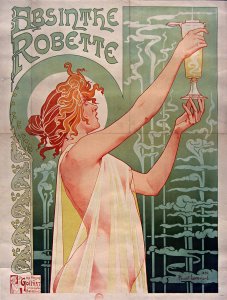 It’s the latter that might be life-changing. The Color of the Year is called “The Green Hour,” a grayed-out green described as having “dual personalities”: moody and intense and, at the same time, “grounding and tranquil.” The name comes from the 19th century custom of drinking absinthe in the evening in Paris.

Surely this is a sign that I need to get to know the green fairy.

For Oscar Wilde, absinthe was “as poetical as anything in the world.” Hemingway called it “idea-changing liquid alchemy.”

I just know it looks pretty, tastes good, and creates a mindful ritual around drinking. The color and taste of absinthe varies, as is the case with wine, and absinthe appreciation may be the last frontier of my drinking career.

Like a lot of people, I have a complicated “relationship” with alcohol. Long story short, my middle-age body (Jesus, did I just write that?!?) has just about persuaded my mind that alcohol is not our friend anymore.

I used to favor Cabernet franc but I’m on medicine that gives wine a metallic taste. I love a good IPA, but they give my taste buds such a flogging that I only appreciate the first one. Continuing to drink out of habit when I’m not even enjoying it is senseless and comes at a steep price. As productivity expert Chris Bailey writes, “Drinking alcohol borrows energy from tomorrow.” His advice: If you’re going to drink at all, it’s worth doing “strategically and with intent.”

That’s where the absinthe comes in. This is my third 30-day “time out” from drinking this year, and it’s helped me understand that I misuse alcohol in a number of ways, from trying to self-medicate and alleviate stress to bluffing my way through social anxiety. Still, I’m not going the teetotaling route, as I truly and deeply appreciate the craft involved in turning a poison into something palatable.

Speaking of transformation, I like the absinthe ritual of La Louche. I want the fountain, the Pontarlier glasses, the slotted spoons.

I want to live like actor Johnny Galecki who declared, “Right now, I’m very healthy. I have no vices left. Except sugary breakfast cereal. And absinthe, of course.”

I want to summon the green fairy rarely, with minimal “borrowed energy,” because my old friend the Lucky Charms leprechaun lacks sufficient magic to restore it in the morning.